Is Babylon ever going to be rebuilt? 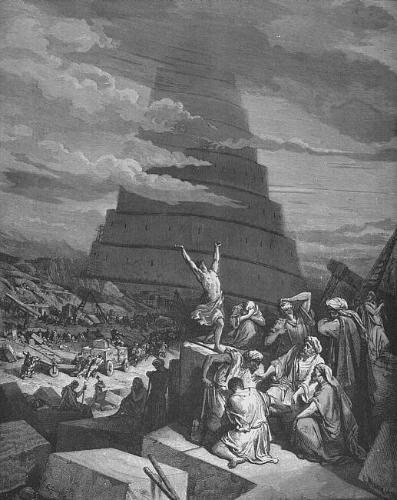 Gustav Doré: Bible Illustrations c. 1866
The destruction of Babel and of Sodom

Here are some Bible passages that provide an answer for this question:

They said, "Come, let us build for ourselves a city, and a tower whose top will reach into heaven, and let us make for ourselves a name, otherwise we will be scattered abroad over the face of the whole earth."

"The noise of battle is in the land, And great destruction. 23 "How the hammer of the whole earth Has been cut off and broken! How Babylon has become An object of horror among the nations!
24 "I set a snare for you and you were also caught, O Babylon, While you yourself were not aware; You have been found and also seized Because you have engaged in conflict with the LORD."
25 The LORD has opened His armory And has brought forth the weapons of His indignation, For it is a work of the Lord GOD of hosts In the land of the Chaldeans.
26 Come to her from the farthest border; Open up her barns, Pile her up like heaps And utterly destroy her, Let nothing be left to her.
27 Put all her young bulls to the sword; Let them go down to the slaughter! Woe be upon them, for their day has come, The time of their punishment.

And Babylon, the beauty of kingdoms, the glory of the Chaldeans' pride, Will be as when God overthrew Sodom and Gomorrah.
20 It will never be inhabited or lived in from generation to generation; Nor will the Arab pitch his tent there, Nor will shepherds make their flocks lie down there.
21 But desert creatures will lie down there, And their houses will be full of owls; Ostriches also will live there, and shaggy goats will frolic there.
22 Hyenas will howl in their fortified towers And jackals in their luxurious palaces. Her fateful time also will soon come And her days will not be prolonged.

For thus the Lord says to me, "Go, station the lookout, let him report what he sees.
7 "When he sees riders, horsemen in pairs, A train of donkeys, a train of camels, Let him pay close attention, very close attention."
8 Then the lookout called, "O Lord, I stand continually by day on the watchtower, And I am stationed every night at my guard post.
9 "Now behold, here comes a troop of riders, horsemen in pairs." And one said, "Fallen, fallen is Babylon; And all the images of her gods are shattered on the ground."

"Therefore the desert creatures will live there along with the jackals; The ostriches also will live in it, And it will never again be inhabited Or dwelt in from generation to generation.
40 "As when God overthrew Sodom And Gomorrah with its neighbors," declares the LORD, "No man will live there, Nor will any son of man reside in it.
41 "Behold, a people is coming from the north, And a great nation and many kings Will be aroused from the remote parts of the earth.
42 "They seize their bow and javelin; They are cruel and have no mercy. Their voice roars like the sea; And they ride on horses, Marshalled like a man for the battle Against you, O daughter of Babylon.

"Therefore thus says the LORD of hosts, the God of Israel: 'Behold, I am going to punish the king of Babylon and his land, just as I punished the king of Assyria.
19 'And I will bring Israel back to his pasture and he will graze on Carmel and Bashan, and his desire will be satisfied in the hill country of Ephraim and Gilead.
20 'In those days and at that time,' declares the LORD, 'search will be made for the iniquity of Israel, but there will be none; and for the sins of Judah, but they will not be found; for I will pardon those whom I leave as a remnant.'

Then the seventh angel poured out his bowl upon the air, and a loud voice came out of the temple from the throne, saying, "It is done."
18 And there were flashes of lightning and sounds and peals of thunder; and there was a great earthquake, such as there had not been since man came to be upon the earth, so great an earthquake was it, and so mighty.
19 The great city was split into three parts, and the cities of the nations fell. Babylon the great was remembered before God, to give her the cup of the wine of His fierce wrath.
20 And every island fled away, and the mountains were not found.
21 And huge hailstones, about one hundred pounds each, came down from heaven upon men; and men blasphemed God because of the plague of the hail, because its plague was extremely severe.

The woman was clothed in purple and scarlet, and adorned with gold and precious stones and pearls, having in her hand a gold cup full of abominations and of the unclean things of her immorality,
5 and on her forehead a name was written, a mystery, "BABYLON THE GREAT, THE MOTHER OF HARLOTS AND OF THE ABOMINATIONS OF THE EARTH."

"The woman whom you saw is the great city, which reigns over the kings of the earth."

2 And he cried out with a mighty voice, saying, "Fallen, fallen is Babylon the great! She has become a dwelling place of demons and a prison of every unclean spirit, and a prison of every unclean and hateful bird.
3 "For all the nations have drunk of the wine of the passion of her immorality, and the kings of the earth have committed acts of immorality with her, and the merchants of the earth have become rich by the wealth of her sensuality."
4 I heard another voice from heaven, saying, "Come out of her, my people, so that you will not participate in her sins and receive of her plagues;
5 for her sins have piled up as high as heaven, and God has remembered her iniquities.

"To the degree that she glorified herself and lived sensuously, to the same degree give her torment and mourning; for she says in her heart, 'I SIT AS A QUEEN AND I AM NOT A WIDOW, and will never see mourning.'
8 "For this reason in one day her plagues will come, pestilence and mourning and famine, and she will be burned up with fire; for the Lord God who judges her is strong.
9 "And the kings of the earth, who committed acts of immorality and lived sensuously with her, will weep and lament over her when they see the smoke of her burning,
10 standing at a distance because of the fear of her torment, saying, 'Woe, woe, the great city, Babylon, the strong city! For in one hour your judgment has come.'
19 "And they threw dust on their heads and were crying out, weeping and mourning, saying, 'Woe, woe, the great city, in which all who had ships at sea became rich by her wealth, for in one hour she has been laid waste!'
20 "Rejoice over her, O heaven, and you saints and apostles and prophets, because God has pronounced judgment for you against her."
If you still don't agree, please read this.
If you have comments, please add them below.

Pam, yes, that visible rdmnieer of the rainbow is a vivid picture, isn't it? Jim and I saw a double one on our honeymoon, while trying to bike down Haleakala Mt. in a windstorm, they stopped the tour 1/4 down because it was too dangerous to continue and that's when we saw the double rainbow.Sharon, your welcome my freind. He came to seek and to save, He still does that today, esp. for His own.Collen, keep holding. God will never let you go and He will move you forward and lead you. He loves you that much my friend.Susan, yes, "all" is the key, isn't it? Oh I have a long way to go...Inspired, yes He is a wonderful Savior, Jesus our Lord.Jen, I can be so stubborn too. May His continued peace be yours today and always. Remember Psalm 31:6, "Rest in the LORD, and wait patiently for him; fret not thyself because of him who prospereth in his way, because of the man who bringeth wicked devices to pass." Wait on the Lord + rest in the Lord = PEACE.Mike, can't wait to find out. I'm glad I have the King living within, can't wait to go home. Until then, I'll journey on this adventure called life and keep trusting Jesus!

We definitely need more smart people like you aornud.

The city Jerusalem will become an international city with all three major monotheistic religions. Judaism,with a rebuilt temple; Christianity with possibly the Vatican relocating; and the Dome of the rock/Muslim. This Jerusalem will be Babylon in contrast to the Holy Jerusalem that will come down out of heaven. See Rev. 11:8 If you live in Jerusalem, ..."come out of her my people and be not partaker of her sins" That goes for Tel Aviv, too. Pray for our Jewish brothers and sisters in Yeshua. They are squeezed on all sides,the orthodox, the muslims, the secularists, and yes, the vatican. Our Lord and Savior is their only refuge.

Hey, Jim. Keep studying, because Washington DC is NOT the economic Babyblon you speak of. America is not a perfect country by any means, but it's by no means the devilish beast some would make it out to be. It might become as such when the rapture takes place, but that hasn't happened yet, and you can still find scores and scores of righteous people walking its streets.